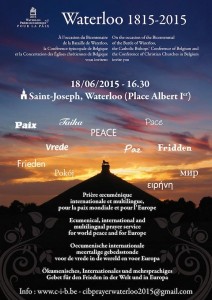 From 18-21 June, hundreds of thousands of visitors will come to commemorate the 200th anniversary of the Battle of Waterloo. They will experience reenactments of the fighting, see people in costumes of that time and welcome many international dignitaries.

On Thursday the 18th of June, the anniversary of the Battle of Waterloo, at 16h30 people from the nations in that battle will gather to remember those who sacrificed their lives that day, to commit to peace in our own times and to pray for an end to war. Join us at St Joseph’s Church (across from the Wellington Museum) in Waterloo for this ecumenical service. 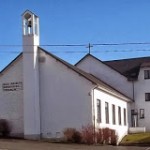 All Saints’ Church will be open 19-21 June with two exhibits: one tells the personal story of some of the people in the battle who had a link to the present-day parish of All Saints’; the other presents alternatives to war, showing how non-violent action in history has made a difference in ending a violent conflict and bringing justice without resorting to war. People will be invited to light a candle, pray and commit themselves to working for justice and peace in the world.

English tea and biscuits will also be available for sale in the church throughout the times of opening.